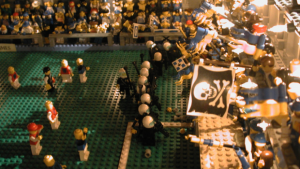 Hooliganism is finally set to be dealt with

Supporters of Legoland FC have said that they still intend on partaking in “loads of rioting” at Sunday’s Legoland Derby match against cross-town rivals Legoland United. The announcement by the hardcore supporter group, the Yellow Heads Ultras, came despite the Empire Police declaration that hooliganism at the showpiece football game will be dealt with more harshly than ever before.

Empire Police spokesman Biggus Piggus said that the authorities have enacted a number of draconian measures ahead of the fixture in a planned crackdown on violent supporters. The measures include the banning of previously permitted objects such as swords, axes and spears from the San Siro stadium. Mr Piggus said that these objects were “dangerous in the wrong hands”. Mr Piggus believed that although the Legoland United fans are “no angels”, the main threat was, “as always”, from a significant section of the Legoland FC fan base

Legoland FC’s Yellow Heads Ultras have however reportedly scoffed at Mr Piggus’s comments saying that they will not have problems smuggling in “stuff” into the ground as many of the workers on the stadium turnstiles are their members. According to one fan, Anto ‘Knuckle-Duster’ Loti, the security forces are “gonna get one hell of a shock on match-day”.

Although the Legoland Derby is the ‘showpiece event’ in the country’s footballing calender, the fixture has been marred by violent incidents since the first meeting of the two clubs in 1993. Amongst the most notorious matches include the 1993 league play-off Derby which saw dozens killed after a roof collapse and the 2000 Derby which saw the killing of the match referee and a number of supporters.