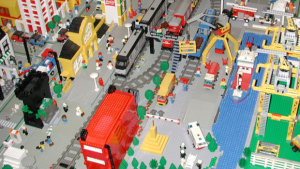 The potential use of slaves has caused a big fuss

The leader of Playmobil, President Bouwers, stunned the world today by threatening to go to war with Legoland if the Republic proceeds with it’s plans to reintroduce slavery.

The news, leaked by the Legoland Times, took all by surprise, not only the Emperor David but also the entire nation’s military leadership, media outlets, citizens and slaves.

According to The Legoland Times Playmobil yesterday set a deadline of one week in which the Legoland Republic must declare it has no intention to proceed with the legalisation of slavery.

The threats come at a sticky time for Legoland as last night the Emperor, unaware of the threat of war, personally overturned the Parliament’s day-time decision not to legalise slavery by confirming that state slavery was now legal as people were needed to build his new Winter Palace “fast”.

Construction on the Palace commenced yesterday evening and The Legoland Times confirmed that a number of prisoners taken from the Dalam slum are working on the site under supervision of troops.

“These, to all intents and purposes, appear to be slaves doing slave work” the paper said. According to the journal’s political correspondent, the Emperor’s move showed to all that he alone holds absolute power in the Republic and that the Parliament is really only a show “to look good”.

The Government’s reaction to Playmobil’s move as been one of ridiculing their foes and putting on a defiant stance. “Playmobilians can’t even spell their own country nevermind invade another” claimed General Idonut Carius of the Legoland Republican Guard, the nation’s elite and fanatical army battalion.

“Playmobil is a land of barbarians and we will wipe them off the face of the earth and enslave them all if they come anywhere close to our radar” he continued. Asked about suggestions that the Republic was facing “inevitable civil war” Carius said that “whoever wrote this has no idea of the current political situation. Only the slaves will oppose slavery”.