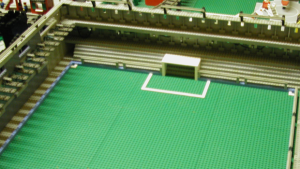 Fans of Legoland FC have been hit with tough new anti-hooliganism measures today ahead of the club’s crunch league showdown with Lion Lakers AS on Sunday.

The Legoland Football Association announced an agreement with the police force that will see the bringing of hand guns into Legoland stadia illegal. Previously no legislation prohibiting the possession of arms in Lego stadia was in place except under certain circumstances such as those games attended by the Emperor.

Many LFC fans questioned on the capital’s streets were quick to express their disappointment at the decision. Nevertheless, according to many observers the LFC hooligan element, spearheaded by the LFC Yellow Heads Ultras will see this law as just another one to be broken.

According to the Castle Clan daily newspaper, members of this ultra group are planning to smuggle in various weapons to the match on Sunday with the intention of attacking the visiting supporters from Castleland.

The Head of the Empire Police stated that policemen are being drafted in from around Legoland for the game and police will be present in force inside LFC’s Partizan stadium come kick-off.