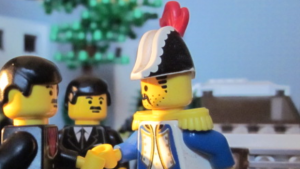 Hopes for a return to parliamentary politics and limited democracy were extinguished yesterday evening after the Emperor addressed the country on state television just a day after the reported fall of the Junta regime.

The Emperor stated the purging from office of the Committee of National Restoration was carried out after General Charles Amun and his administration brought the Empire “down the wrong path”. The Emperor did not candidly elaborate further on this point.

Instead the head of state confirmed that the Imperial land and sea armies were now under his direct command with the internment of former generals and known supporters of Amun underway to inhibit the emergence of any reactionary forces.

A move to protect the borders from “foreign threats” is underway as a matter of urgency he said with 30 troops being sent to the Belvistan-Legoland border. Although no foreign powers were named it is believed that the PBR and Federation of Legopolis are the countries of concern.