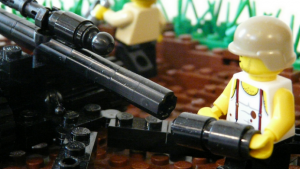 Federation forces have now been accused of war crimes

An initial wall of silence has descended over the government of the Federation of Legopolis this morning following what appears to be disturbing evidence of “crimes against minifigs” committed by its forces in the war-torn region of Ancarta.

A transcript of an internal radio conversation between an unidentified Major and junior sergeant from the Federation military released today by Brikileaks describes how Federation forces killed fleeing minifigs. It is unclear whether the minifigs were armed combatants or civilians but what is clear is that both military officers considered the operation “fun”.

“Some fun practice I’m sure. More fun than simply blasting away at sheep”, are the chilling words from the Major whose inferior unhesitatingly agrees.

Whilst the City of Legopolis remains quiet on the matter, the Emperor of Legoland weighed in with his view when questioned on the matter whilst preparing to line out for Medalin against Port Villa in the LFA SuperLeague.

“If these reports are true then we will have to reconsider our strategic relationship with Legopolis. No country can act above the laws of common decency to our fellow minifigs”, he said, whilst adding, “I hope to improve on my performances in recent games which I admit have been below par”.

The Committee of National Restoration, which has been laying low since the Emperor took a handle on affairs, is expected to publicly request a detailed investigation is carried out by an independent body. It is widely thought that the regime will be pleased to see the Federation military put back into its place by the international community as despite being a fellow member of the Tripartite Axis, the alliance is is now believed to be more or less meaningless following recent spats.

A full copy of the transcript is available to view here.