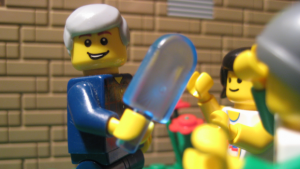 Deeds, handing out ice-pops, was hit with the kids

Growing socialite Fred Deeds was in the war-torn city of Acreales in the Paradistan province today opening the country’s first-ever children’s charity. The minifig, eager to engage with journalists present, claimed it was “great” to give something back to the minifigs of his adopted homeland.

“To see the faces of these kids is just great. It sure fills me with pride to be here in what is no doubt a world first, a charity for kids. I’m very proud to be able to lend a hand. Things like this are what I live for.”

The charity will offer support for children made orphans following the Empire’s invasion of the south western province last year. Deeds said it was important that children, who didn’t exist until recently, weren’t forgotten when the conflict ended.

“It’s easy to forget that Children didn’t exist in the 1980s, 90s and 00s. They’re a new phenomenon and quite treasurable. We don’t have many so we need to take care of the ones we do have.”

When the topic of his critics was raised, Deeds ended his chatter to the press with some parting words.

“Here I am helping those in need, giving literally the smallest figs in our society a moment in the limelight, an opportunity they wouldn’t get otherwise. One would have to question, where are my critics? Opening charities? Not likely. This is something minifigs with some real morals just actually might do.”