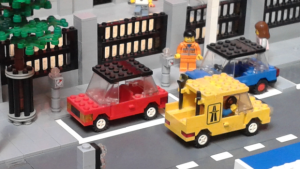 Tile built roads which first appeared in 2012 are to go

The Emperor paid an impromptu visit to the Davidium’s Council of Minifigs chambers today and told members to put the brakes on tile-based road building and instead start ordering bricks. The minifig said he had already personally funded the purchase of “an initial £175m worth of dark bluish grey bricks” which he confirmed had arrived at Holtdam’s dockyards last week.

“It’s time we got our act together and quit short-term stinginess,” he told the Council explaining that a different approach is required for Davidium to reach “its heights.”

The announcement drew gasps amongst many members of the Council who could be overheard muttering doubts about the affordability of such a shift. But the Emperor was having none of it.

“I’m here to make improvements and remove stumbling blocks and stumbling figs. One has to learn from experiences and do things differently when problematic matters remain unfixed and an opportunity to change course arises. This is one such opportunity and I intend on grasping it.”

The problematic matters the Emperor explained were threefold.

“Conservative estimates for emergency housing topping 400 minifigures next year and a further 300 in 2016. There’s only one solution for this, new high density housing projects”, he added.

Aides to the Emperor later elaborated that the envisaged capital will be raised above sea-level by at least 5 studs. The project would also enable public utility providers provide key services including waste treatment, fresh water and electrical power.