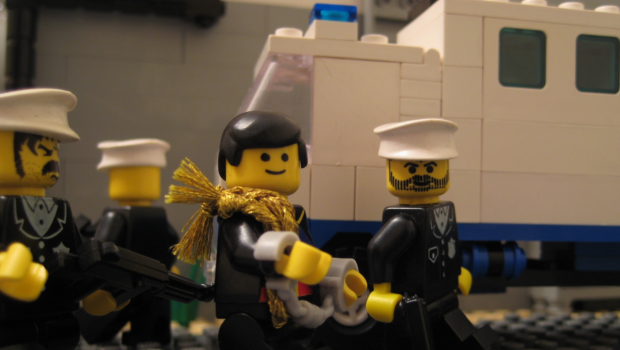 Members of the Caprican royal family, Prince Christian and Princess Grace, are this evening being interrogated by the Intelligence Service wing of the Empire Police. It is understood that the duo were arrested in Davidium this afternoon by members of the Special Branch as part of an anti-espionage crackdown currently sweeping the corridors of political power in the capital.

Whilst being escorted to an awaiting prison van, an apparently positive Prince Christian shared a brief word with members of the public that had stopped to see the commotion. “There appears to be some misunderstanding. Look forward to seeing you all soon”, he said.

Whether he or the Princess will be seeing anyone outside police custody anytime soon is unclear. If found guilty of aiding a foreign power in any actions against the Empire, Prince Christian and Princess Grace face a possible death sentence. Should this be the route they take they would be the first foreign royalty executed in the Empire since that of King Ken of Norton on 7th July 1991.

A statement issued this evening from the Ministry of Correction did not mention the duo but spoke of “the commencement of a cleansing programme to purge the Empire of rogue elements in the interests of public safety.” It added, “all minifigures detained will be treated well.”  As yet there has been no comment from the Caprican government.

Our foreign correspondent reports that the two suspected spies have had a turbulent time since reaching the Empire in April, most memorably immediately following their arrival when alarms were raised following the discovery of two headless corpses in their hand luggage.  Criminal proceedings against the royals were not undertaken however after it emerged the barbaric practice of ‘Clothes Changing’ is acceptable in the banana kinglet of the Capricas.