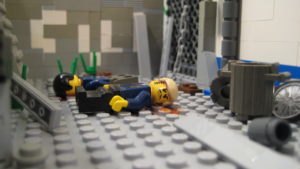 The 2010 killings were blamed on the Hole Heads Clan

Two minifigures have been arrested by the Empire Police in connection with the 2010 murders of 2 minifigs off the Massar industrial estate in the Ribistan area of Davidium.

The victims had been found shot several times at close range in the head and upper body in a secluded lane. Police reports at the time linked the killings to a gangland fued between rival organised crime syndicats operating in the capital.

The Empire Police confirmed the arrests today and are questioning the minifigs under the 2006 Offences against the State Act. The minifigs can be held without charge indefenitely.