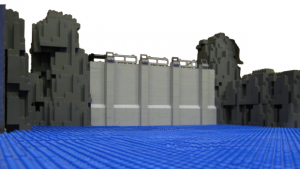 The dam will be operated by PowerGen

The nation’s first hydroelectric dam is set to open soon with construction work nearing completion according to the building contractors Linet.

Spokeswoman for Linet, Ms Losingum Fig, told The Legoland Times that the final brick of the dam’s main section was laid last weekend with just the installation of the main generator, the flooding of the valley, and some “general tidying up” now outstanding.

The dam, yet to be officially named, will be operated by newly formed PowerGen Company owned by businessfig Mr Exploitus Fancyus. Mr Fancyus has called the project to develop the dam the “greatest move forward in Legoland’s energy sourcing”.

Indeed, green groups, including Greenpeace, have welcomed the decision by the state to fund the project and thanked the Emperor for his personal funding. Greenpeace believe the dam’s ability to produce energy will “significantly reduce the need for coal”.

PowerGen’s Mr Fancyus claimed that a project such as this “could never get off the ground without major financial assistance from the government” and praised those in power for “focusing on developing renewable energies”. He added that “renewable energy is the only way forward”.

It is understood that the cost for the construction of the dam is in excess of £80m but the total cost of the project, including the flooding and relocation of ND Town and its valley may cost up to £150m.