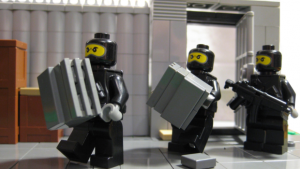 Officers were seen removing servers and other IT related infrastructure

A dawn raid on a rundown warehouse in inner Davidium has resulted in a major coup for the State in its continued fight to shape and control public opinion after security forces confirmed the arrest of the entire Brikileaks membership.

The number of arrested is unknown with no witnesses to the early morning raids. Agents from the Empire Police were in the process of removing evidence and hardware including the organisations apparent server infrastructure by mid-morning.

A statement issued this lunchtime from the Ministry of Information added little information but did indicate the State’s delight.

“This morning at 6am officers of the Empire Police and Intelligence Service detained multiple extremists and in the process have quashed the extremist group that was known as ‘Brikileaks’. The group is hereby dissolved. Minifigs around the world can rejoice knowing that justice will be done and the spreading of lies purporting as news has been dealt a significant blow. The Ministry wishes to thank all parties who assisted in the apprehension of these criminalfigs.”

Others who spoke to the Minifig Times were less than pleased however with multiple proponents of minifig right and many notable scholars expressing serious concern and dismay at the development. They were however unwilling to go on the record.

The mysterious Brikileaks group has been a torn for multiple states since January 2014 when it emerged bringing a number of scandals from the unknown to the frontpage thanks to what it described as insider leaks.

Among the most notable cases included apparent evidence of crimes against minifigs carried out by the Federation of Legopolis in the Ancarta region during the Legopolis Civil War. The Government of the Federation is anticipated to be pleased at the news.