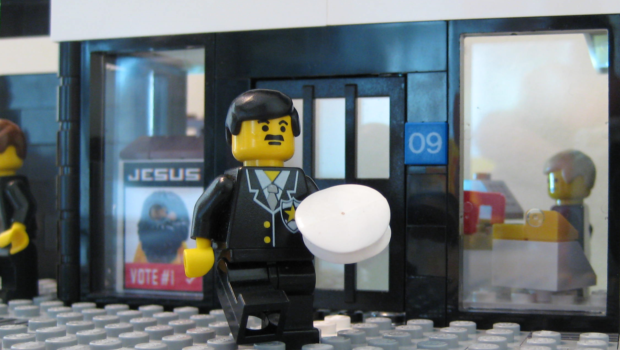 Six members of the so-called Democracy NOW movement have been remanded in custody after being arrested by the Empire Police for “breaching public safety” at a protest in the capital this morning.

The unnamed minifigs are understood to be part of an international movement whose aim is to bring free elections and other freedoms to minifigs in all corners of the Minifigure World.

That lofty ambition has however placed it firmly in the crosshairs of both the Federation’s and Empire’s ruling classes who see it as a direct threat to their control and security.

The Empire Police issued a statement this lunchtime warning others not to get involved in what it called “collaborative criminal activity”.

An anonymous supporter of Democracy NOW told the Minifig Times that she felt the state authorities here are complicit in preventing minifigs from reaching their full potential.

“When we have innocent figs being rounded up like 1×1 plates for doing no more than shouting and waving placards you have to ask what’s going on? We have the minds of some of our brightest being shackled. It’s an abomination.”

Democracy NOW first germinated in the Federation of Legopolis and is not yet officially banned in the Empire.