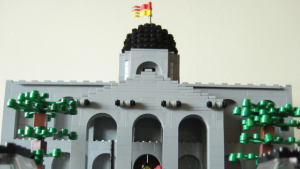 The Central Bank has reversed last year’s revaluation of the Pound against the RHC in a move that significantly decreased the Pound-RHC exchange rate.

The institution claimed that the Pound might be further devalued in 2017 in a move aimed at boosting the export market and reduce the balance of trade deficit.

Central Bank Governor Alaric Charlemont told state television network RTL that it had not being a mistake to devalue the Pound in August 2015.

“We experimented and following this have determined that the traditional rate worked better however I think it’s important to note that there was and is no cost to the exchequer during the process.”

Commenting on the development the Open Financial journal’s Morris Hindelhem said today’s action will have no impact on the average minifig.

“The only ones who deal with the RHC are accountants who work for state bodies involved in fiscal spend. The change is simple a bookkeeping change, a paper exercise. The average fig who probably doesn’t care, shouldn’t care.”