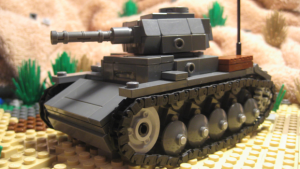 The Leopard pictured with a mounted 0.6cm gun during training exercises in the Basicstan province

Images of a new Imperial Army battle tank were released today by the Ministry for War just hours after the Emperor announced the military would obtain emergency funding that is significantly in excess of that previously budgeted.

The Leopard, the Ministry said, has been specifically designed to support multiple configurations, increased mobility and unsurpassed performance in multiple war environments.

Coming less than 2 weeks after the Federation of Legopolis revealed the Titan Mark 1 as its latest in tank design, many minifigs are of the view that an arms race is underway between leading powers.

Murdoch Vickery, security analyst with PwP, explained that the Leopard is likely to add considerably to the Empire’s military capabilities because it appears to have realised its design objectives. 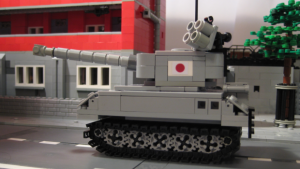 “With larger 9.9cm main guns the Tiger T-2 and its predecessor, the Mammoth T-11, both struggled in some urban settings, in particular in the narrow streets in towns and villages of Eastern Castleland. The Leopard is unique in that it has been especially designed to support different main gun configurations enabling shorter guns for tight urban or forested theatres. A lighter main gun also supports more rapid manoeuvrability so we can expect that the Leopard will certainly be agile.”

The Ministry did not give any indication as to the number of Leopard tanks that will be rolled off the production line. The Imperial Army is understood to have around 5 Tiger T-2s most of which require significant servicing to be battle ready. A smaller number of older Mammoth T-11s also exist however these are more likely destined for military museums than the battlefield according to experts.