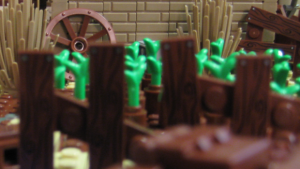 Agricultural output has been falling for 5 consecutive years in Castleland

The Ministry of Information has instructed popular Castleland daily the Castle Clan to retract recent reported stories of extreme food shortages in Eastern Castleland brandishing the reports as “an exaggeration”.

The Ministry explained that recent bad weather had hit local harvests and any reduced food availability was a temporary blip. The Imperial Army’s scorched earth policy was not adversely affecting the minifigtarian situation of average Castleland subjects as this practice was only being carried out in Legoban controlled areas it said.

The Castle Clan however reported food riots in the townships of Narbala and An Amm south of Turkmenium describing dozens of desperate minifigs looting markets in search of basic foodstuffs. The paper also showed photographs of skeletal remains it purported to be fully-plastic minifigs just last month.

Castleland’s regional leader, Lord Colossus Denarius told addressees at a lavish banquest in Imperium’s Trichian Palace on Sunday that skeletons were always apart of the Castle theme and were not former fully-plastic Castlefigs. He added that in any case he had assurances from Davidium that aid would be sent if aid was required.

“The peasantry do not need aid. Levels of extreme poverty are no different today than they were yesteryear and in times past. The peasants have no need for aid, conditions have not changed drastically.”