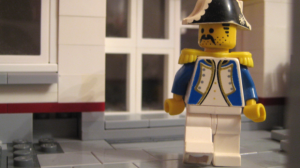 Emperor David is suffering from Loose Leg Syndrome (LLS), a potentially serious debilitating condition according to medical records shown to the Minfig Times.

The notes, copies of those of from a team of doctors at the Royal Imperial Hospital, have shed light on a condition that is reportedly blighting a growing number of minifigures, in particular those born in the Classic Period between 1979 and 1997.

“Severe wear and tear on the leg hinge joints has led to the patient developing LLS. Currently in the second phase, the prognosis is for further worsening of the joints unless austere lifestyle changes are made,” read the notes.

Other documents referred to potential surgery to rectify the problem with a dual leg transplant a possibility. “This option should be discussed with the patient after consultation with Legal,” the document stated. The practice of Clothes Changing, which could also rectify the problem, is currently outlawed under current legislation.

Minifigs Times health correspondent Gus Chimes explained that Emperor David, approaching his 35th birthday this week, has a Polymer Degradation of just over 25 years which is relatively high in the PD Index.

“A PDI of 25 coupled with over a decade playing professional football and general over-use has brought the onset of LLS slightly earlier than would otherwise be expected. It is likely that the Emperor may have to consider hanging up his boots and assist Medalin off the pitch but not on.”

“Hopefully the Emperor has a quick and painless recovery. I’ve encountered far too many figs with this debilitating disease, and can only hope that medical advances soon evolve to address this threat.”

There were also reports that the government of the Lego Republic sent their best wishes but this was denied by Foreign Secretary Fred Deeds.

“Unfortunately the only thing we’ve just heard from them is a brick-wall silence. As for me, I think I speak for all my colleagues at the office, we consider David a friend and leader of the international community and hope that all will be well soon. Emperor David will be in our thoughts.”