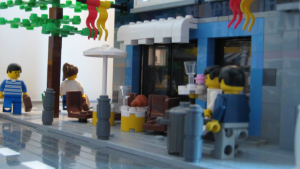 In his first act as head of the Foreign Office, Fred Deeds has announced that he had secured agreement to relax the trade embargo imposed on the PBR and Federation of Legopolis after their respective Megablok Disease outbreaks were now “getting under control”.

The move sees the import ban on non-agricultural goods removed altogether although the travel embargo on minifigs will remain in place. This aspect of the much criticised policy abroad was essential, Deeds claimed, to ensure the “abhorrent infection” did not spread eastwards.

“The integrity of our source plastic is paramount and until we can be sure what’s coming in is safe we must retain restrictions. I know this mechanism has been criticised by a handful of luminaries outside our borders but these minifigures need to ask themselves why should we place their personal vacation plans over that of the health of our own public?”

Deeds said he was a supporter of reviewing the decision and was not involved in a tit-for-tat economic war with the PBR or indeed any other country.

“Yes, it is true. I am keen on ensuring that such policies be reviewed on a regular basis to see whether their enforcement merits the desired results. If they’re no longer needed or if they can be eased further, they will be. Let it be known I am in no way trying to be adversarial with anyone. The countries affected are countries whom we have partnered successfully in the past. The reviews do have a genuine place in the programme.”

He added that the concerted campaign against him in foreign media was waning as readers “no doubt [saw] through the lies”.