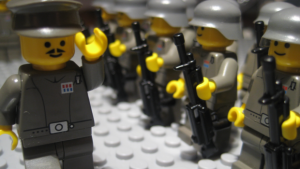 Following a deteriorating freedom of expression situation, culminating in a raid on the offices of the Minifig Times yesterday evening and subsequent confiscation of original publishing works, the Minifig Times can confirm the relocation of all key data storage servers and personnel outside the jurisdiction of the Empire of Legoland.

The difficult decision was taken by the management board following continued pressure from the new régime since the February coup d’état, pressure which has noticeably escalated in recent days.

The Minifig Times can confirm that the publication and dissemination of material released to the public by the BrikiLeaks organisation is now illegal inside the Empire. The editorial board of this news agency strongly condemns this unwarranted action which is unconcealed state censorship and against all principals of freedom of information and minifig rights.