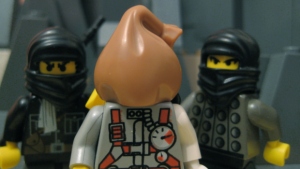 The hooded minifig is unmasked during the 5 minute video

It has emerged that downed airfig Lieutenant Greg Brickjan is in the hands of Al-Medahyin militants and not in the guardianship of Buntu tribesfigs in Carthagia as previously thought.

Confirmation of Lt Brickjan’s fate was determined following the posting of an unnerving online video by the militant group. In the video a hooded minifig, later uncovered to reveal Lt Brickjan, is displayed in front of 2 heavily armed masked Medahyeen. The video has no audio and the location is unknown.

The emergence of the footage is expected to cause extreme distress to the family of the PBR airfig who crash landed in Carthagia in August of last year. His fate looks bleak after comments from the head of the PBR military earlier this week amounted to ‘no-deal no-way’ diplomacy.

Whether the PBR leadership will change tack to save the life of one citizen remains to be seen. What is clear is with the noose tightening political pressure is mounting on the Williams City administration to do something to ameliorate the situation.

In Davidium the Ministry of Information quickly responded to allegations that the regime had mishandled the entire affair allowing Brickjan to fall into the hands of violent extremists through sheer lack of effort. Many believe that Davidium disregarded the Buntu’s payoff demands and had opted to play the waiting game. It now appears that the Buntu lost patience and sold the minifigure on to Al-Medahyin or to intermediary slave dealers. The Ministry of Information however blamed rain for the failed recovery. 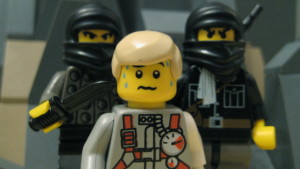 The airfig is shown to have one arm in a plaster

“The Home Office exhausted all means at its disposal to try and bring Lieutenant Greg Brickjan’s into the custody of the Imperial Army. Unfortunately due to extremely poor weather conditions throughout December and January, the Home Office was unable to maintain communications with the nomadic tribefigs.”

The Ministry’s statement may not satisfy some prominent politicians in the PBR who are believed to be losing patience with the Empire’s ostensible disregard for PBR interests.