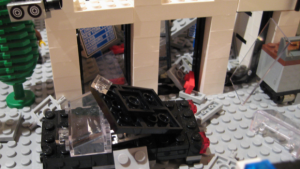 Davidium, which has seen its fair share of terror attacks, may look to spread the violence abroad in retaliation

In noticeably undiplomatic semantic, Foreign Secretary Fred Deeds today condemned the PBR and Lego Republic for “supporting extremists” in campaigns of terror currently being waged against the Empire and its interests.

Deeds’ condemnation came after the PBR press revealed that the PBR government had agreed a deal with Al-Medahyin for the release of the hostage Greg Brickjan, a deal which lead the Williams City administration to openly criticise Davidium for so-called “anti-religious laws.”

“We no longer publicly support the Empire of Legoland, its actions and its anti-religious laws,” wrote PBR president Bob King in an official announcement.

“We also publicly remove any threat of military action against the Al-Medahyin group. Their fight for religious freedom is justified,” he added.

Deeds called the deal “illegal” and labelled the minifigure, understood to be a pilot of the PBR air corps, at the centre of the incident, “a wanted minifig”.

Despite his calm demeanour and oddly pleasurable smile, Deeds did not mince his words in stinging response with a barrage of hostile sound-bites to the joy of the assembled tabloid hacks. His accusatory words have dramatically reopened barely healed wounds between the Empire and the Western Powers.

“We know who our true friends are and they aren’t Kalashnikov toting bandits and certainly not carrot-top eating Williamite or Bricksburgian hunter-gatherers. The Committee will accelerate the tightening of national security in light of the terror pact these states have established,” said Deeds.

The head of the Foreign Office confirmed “retaliatory measures” would be taken however he did not further elaborate on the nature and scope these may take.

Political commentators have indicated that the Empire may now seek to fund groups deemed enemies of either the PBR or Lego Republic. This could be difficult with the Lego Republic however as Dr Hubert Groons of the Emperor David University explained.

“The problem with the LR is that no one knows whether they have any localised militant opposition to begin with.”

According to Dr Groons the PBR is significantly different with the political landscape akin to a potential tinder keg ripe for exploitation.

“Peace and normality has been a hot-potato for the PBR for years now and there are a host of groups and racial divisions which could potentially be stoked by outside forces. This is certainly one option open to Davidium,” he concluded.