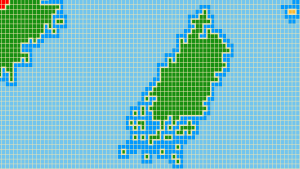 The Foreign Office has announced that the Committee for National Restoration has sanctioned the delivery of emergency aid to the troubled Ancarta region. The disputed area, contested over by the Federation of Legopolis and natives, is reportedly suffering from a severe shortage in foodstuffs and medical supplies as Federation forces burn crop fields and hoard medicines for their sole use.

Aid, in the form of food supplies and medical equipment, is now being readied and will be flown out in the coming week the division of the Empire’s Ministry of Government confirmed.

“The Empire has a long tradition of sending aid to those in need and has earned a valuable respect amongst its peers in the international community for such efforts,” said Foreign Secretary Fred Deeds.

The minifigure does not top the charts of the Federation of Legopolis Ruling Party’s most popular minifigs and Deeds indeed not pretend to think otherwise.

“Let’s call a modified plate a modified plate. They’ve had a Clikit on their shoulder for some time. That said, I think we’ve now put personal issues aside and I am confident we’ve found common ground. It’s purely a minifigitarian programme aimed at benefitting minifigs, whether they be supporters of Ancartan independence or not, so it’s in effect, neutral.”

Deeds said that he had listened to a growing chorus of advocates for intervention and was partly motivated by Emperor David University lecturer, philosopher Elliot Stevens.

“Like many figs, his words resonated with me and in the warmest cockles of my heart I knew Legoland had to act. History will show us in a good light.”
According to independent observers, the trouble in Ancarta has escalated recently with the preeminent opposition group to the Federation of Legopolis’ subjugation of the region, the Ancartan Independence Movement (AIM) and the Federation military set for a protracted conflict.