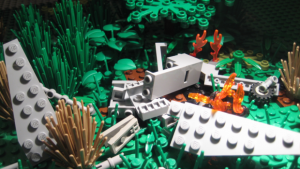 Initial reports claim the wreckage is spread over 1.5km

Images have emerged of what appears to be the wreckage of a plane that crashed in remote countryside in the Empire’s southern Carthagian province.

The photographs, which first appeared on the banned social media website Facebrick, show still-smouldering remnants of what independent aerospace specialists from Airoline have described as “unquestionably a military aircraft”.

Initial reports confirmed that the debris is spread over a 1.25km radius which suggests that the crash was likely the result of a catastrophic explosion above the skies.

Speculation is mounting that the plane may have been a PBR fighter which illegally entered Legoland airspace as reported in foreign media outlets. No military insignia could be seen on the images however.

A coy spokesfig for the military government in Davidium would not deny if the plane was the victim of  Imperial Army fire and did little to calm concerns from the wider Legoland public. 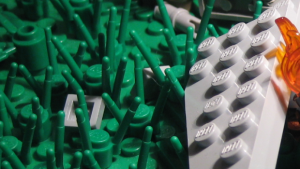 “We are presently involved in security operations against a number of terrorist separatist groups in neighbouring provinces. These operations are aimed at securing the ground and skies above for the protection of all”.

The news has added to the woes of both Airoline and the Empire’s largest airline, Legoland Air. Both companies have been struggling from plummeting “studs on seats” in recent months over the deteriorating security situation enveloping the Empire and wider Minifig World.