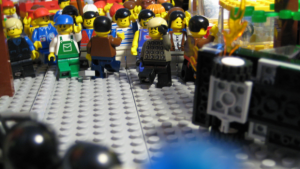 There are thought to be over 1,000 foreign born figs in Legoland. In recent years a growing divide has emerged between immifigs and Classic figs leading to multiple instances of public disorder.

Announcing the news at a state banquet in Medalin the dictator confirmed that implementation of the programme was “of utmost personal importance” and it is in fact already proceeding having commenced under-wraps close to two weeks ago.

The goal of the clean-up is to identify where possible the origin of all minifigs and parts and expel those minifigs proven to be foreign born and deemed to be of no material use to the Empire. The state plans to capitalise on the cleansing by selling undesirables to slave dealers who will in turn seek imbursement for their wares from slave buyers abroad.

Similarly, parts known to have been acquisitioned by the state from foreign used parts dealers will be gathered together and sold by the state’s asset management agency in bulk lots to the highest bidder. This will also help replenish state coffers which are thought to be straining following the Custom House project.

The Emperor explained that new minifigs will be microchipped in order to prove their identification with the chip being inserted between their legs and torso. This, he clarified, will “ensure true Legolanders are never confused with immifigs from now on”.

Demographers estimate that potentially more than half of the population of the Empire is foreign born and such a “cull” could see the population halve. Some also point out that the programme could form the basis for a long awaited census which would once and for all remove doubt as to the numbers of minifigs living within the Empire’s borders.

The Minifig Times understands that 70 Blacktron slaves were sold to foreign buyers in the past 10 days.