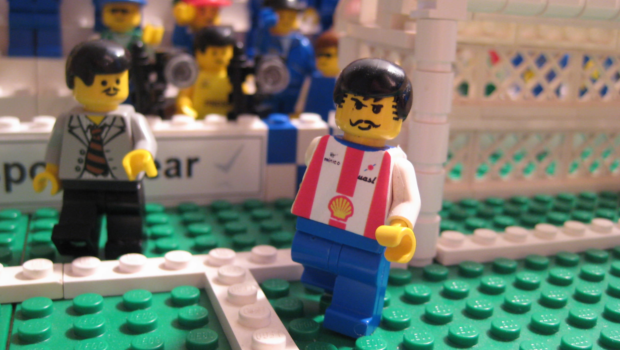 Join in the fun!

If you like both LEGO and football, you may also like to own a franchise in the LFA SuperLeague.

So what’s involved? To takeover a team all we need to know is the name of a minifig who will become the new owner and a decision by you on how this minifig will finance the deal. As making up a name can’t be too difficult here we focus on the finance side of things and in short there are 2 simple options available to pay for a team buy-out.

The first is to transfer the cost of the team (in Lego Pounds) straight onto the balance sheet of the team you’ve picked. This option involves no real-money but typically saddles the team in debts that need to be paid off at some point in time (typically within 2 years) to avoid your minifig losing ownership of the franchise (apart from unhappy minifig supporters, this is the worst thing that can happen if things go ‘pear shaped’).

The second option is to buy the team with a once-off real-money payment (RMP) typically made through PayPal or bank transfer.

A table of currently available teams is listed below along with their associated pricetags in Lego Pounds or RMP. Perusing the table you’ll notice that in essence you have two main options, i.e. forking out a fair bit of cash, or not.

Cheaper, low budget teams are simply less expensive teams to takeover. Opting for one of these reduces the negative impact of large debts being placed on your new team’s balance sheet should you choose this financing option which allows you more room to focus on growing the team into a bigger side. Cheaper teams however tend to be less prestigious teams with reduced potential for establishing significant revenue streams, for example they may have smaller fan-bases and stadiums with lower seating capacities which can impact sponsorship deals, TV revenue and ticket sales. These teams may have difficulty just avoiding the chaos that is the annual relegation battle but with all that said success can be attained.

Joining the big boys of Legoland football is expensive business and should you pick one of the available franchises from this group you can expect to fork out a premium. If not financing the takeover using a RMP be careful not to over-extend the club on the financial side or you may steer the club towards financial ruin and inevitable disaster on the football field. The best way to determine whether you will encounter money troubles later is to check out the franchises assets and liabilities, namely the value of their current playing squad, their current cash reserves, infrastructure (eg stadium) and staff wage bill.

You may also wish to check out the current position of the franchise of interest to ensure they are not heading towards a lower division.

Our Tip
Check out the team’s recent history and playing staff before making your choice. Past league tables are a quick and easy way to review how a team has been doing over a number of seasons. Reviewing the team’s playing staff focusing in particular on player ratings and values will give you a good indication as to whether there is the potential to sell some top players to pay off the team’s new debts resulting from your takeover. But beware, selling all your team’s best players can only result in one thing, near certain poorer match results, unless you uncover some cheap talent as replacements!