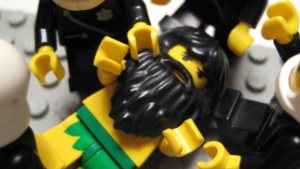 Jesus was severely “fig-handled” in the arrest

Jesus shot to fame in 2008 when he turned up in Legoland accompanied by a group of economic migrants. Unfortunately for the son of God he found himself immediately out of a job upon realising God had been banned under the Act of Common Sense by the state since September 2007.

For a number of years Jesus was a regular feature outside Davidium’s social welfare offices eager to claim his unemployment benefit. Although the Son of God shied away from the media spotlight, he hit the headlines on multiple occasions.

Jesus was photographed being beaten up and dragged away by members of the Empire Police in June 2008. According to witnesses at the time, around a dozen policemen turned up in armoured riot vans and got out to give the holy fig “one hell of a beating”.

Following this the minifigure attempted to run for election as an independent but failed to win enough votes for a seat in the then parliament, the Hall of Minifigs. The fig is however still a keen social troublemaker and has butted into numerous political issues and is regarded by most as an annoying
torn in the side of whoever is in power.

More recently Jesus has followed a new career path in the entertainment industry. He is currently the host on the TV talk show, ‘What would I do?’.