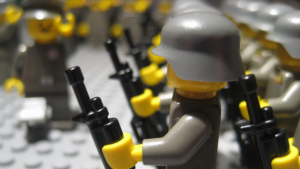 Prime Minister Robert Goldman has announced unprecedented cuts to the Imperial Army as the country’s security focus shifts from external to internal threats.

Describing the military as “unnecessarily bloated”, Goldman stressed that continued investment would be made in military equipment and systems during his term in office but the numbers of troops needed to be “adequately reduced” to free up funds.

Savings accrued would, he said, be “ring-fenced for the military and internal security forces.” Experts believe that the police and not the military will likely be the beneficiaries as the State looks to beef up domestic security forces following its evidential declaration of war on the drug cartels.

The recently established professional army, which comprises 100 soldiers, are expected to be the hardest hit with no fewer than 80 potentially facing the axe. Such a move would reduce combined Imperial Army, LRG and reserve ground forces to around 55 with the air corps and navy combined adding an additional 20 personnel.

Addressing the Hall of Minifigs, Goldman dismissed opposition members’ concerns that the reduction in numbers represented a serious threat to the Empire’s national security.

“The Intelligence Service has provided a detailed analysis of the military strengths of all nations so we know where we currently stand. I can assure you that the Empire will still possess the most powerful armed forces of any nation after the restructuring programme is complete.”

Goldman denied suggestions from Not In My Baseplate leader, Philip Carter, that the cuts were intentionally targeting the military because of their involvement in the February 2014 coup d’état that removed parliamentary rule.

“Mr Carter should know that the coup was orchestrated by corrupt generals and not Imperial Army soldiers. His suggestion that the army are a threat to the Hall is frankly shameful.”

The Imperial Army’s numbers have dramatically declined since its heights in 2009 where it reached over 400 following the recruitment of Blacktron migrants. The 2015 Migrant cleansing programme however saw the vast majority of these, between 380 and 390, removed and sold into slavery. A token number of 10 to 20 were retained as a reserve battalion. Those removed were replaced by a 100 strong professional fighting force which now sees itself at the centre of potential cuts.