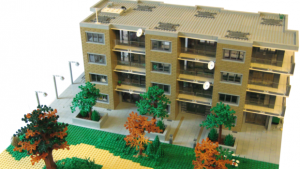 Billed by the developers as the most luxurious apartments anywhere in the world the capital’s largest residential project is now open for prospective buyers.

The lavish 4-room apartments aren’t available to any flush fig however with connections to the right figs in the right places an apparent must.

In a bizarre tale, despite having more cash than an entire city of figs could need, some of the wealthiest minifigs in the land are claiming that they have been side-lined because they are not considered close enough to the regime.

Accusations were first tabled by Helix Legoda, founder and owner of the automobile giant Legoda Motors speaking to talk show host Jesus. On the recently reinstated television show ‘What would I do?’, Mr Legoda, whose personal fortune is believed to be over £1bn, told Jesus his attempts at viewing a penthouse apartment, valued at £10m, was ignored with his lack of ‘friends’ cited as the reason.

“By friends they meant friends of the Emperor, Council or Inner Circle”, he clarified listing in effect the three components that make up the current regime.

“I am a friend of the Emperor but that doesn’t cut the mustard anymore it seems. It seems I need to cosy up to a few others.”

Mr Legoda’s complaints were subsequently backed up by billionaire Miles Cadbury who called the show later exasperating that “the same thing happened to me!”

On the streets there is little sympathy for the duo however with the general consensus that the whole thing is a disgrace and that these aristocrats are as bad if not worse than the seemingly corrupt regime.

“If you ask me Legoda and Cadbury should hang their heads in shame,” said one fig who called himself “an angry Wiggz Wigglesworth.”

The discontent shown from some of the elite is unlikely to help with social cohesion experts have suggested. The hoards of homeless figures that inhabit the outskirts of Davidium are already fuming said social commentator Harold Gilberton.

“If they hear the likes of Legoda complaining about not being able to snap up a penthouse they could snap. Luckily they don’t have TV”, he noted.