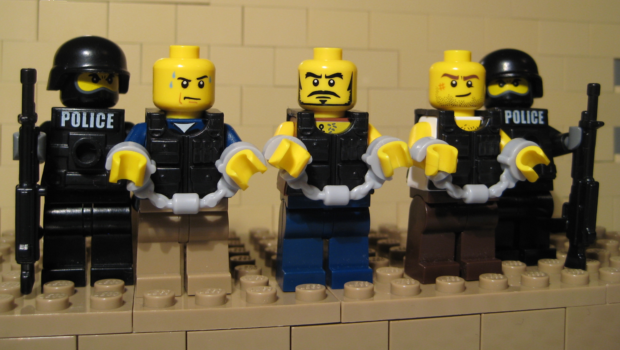 The Empire’s most notorious crime boss and head of the Hole Heads Clan, Pol ‘El Plato’ Cardha has been captured.

Parading the handcuffed minifig to the press, the one-time most wanted fig in the land was in bullet-proof attire for his own self-protection.

El Plato was apprehended after dozens of armed police backed up by the army, raided an apparently unused warehouse in East Davidium. The site turned up El Plato and his brother Ryan Cardha and another wanted figure, Sam ‘Seven’ Sam. All three were discovered hiding in a hidden bunker connected to the warehouse.

Lawyers for Cardhas have claimed state prosecutors have “no evidence” to tie their clients to the multitude of crimes committed by the Hole Heads Clan that range from drug smuggling, illegal minifig trafficking and the assassination of officials from the judiciary. It is expected that Cardha will amass the best of the best from the legal world to fight any case brought against him by the Imperial Courts.

Cardha has been on the run since the August 2008 assassination of the then State Chief Justice which resulted in a failed clampdown on the leadership of various organised crime syndicates.

‘El Plato’, given his nickname by Gardinian criminal gangs for his preferred skull crushing weapon of choice, 1×2 plates, is suspected of ordering the slaying of three police officers outside the Lay Low Nightclub in Davidium in October 2010 and of directing the attempted assassination of a rival Shaven Heads boss in November 2011 in a drive-by shooting that left 8 minifigs dead.

The capture of ‘El Plato’ is a huge public relations boost to the Empire Police and the government but how it will affect the Hole Heads day-to-day operation remains unknown. The gang is believed to have close to 30 members making it the second most powerful organised crime grouping after the Legoland Mafia.

With an array of enemies in both the criminal world and the establishment, Pol Cardha is expected to remain under indefinite 24-hour watch ahead of his trial for his own preservation.